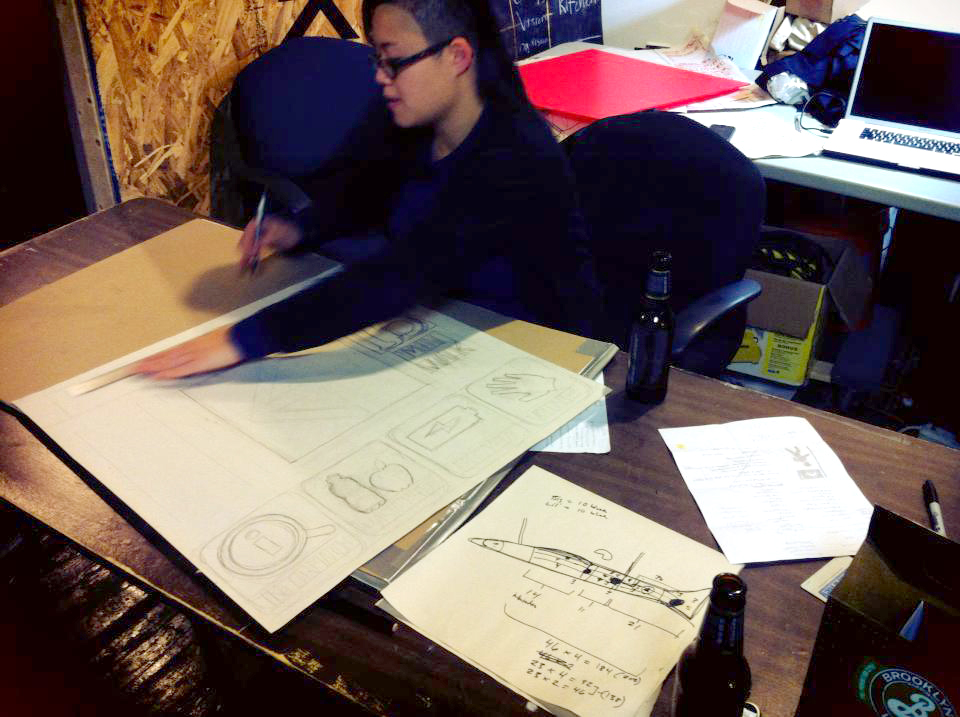 Ange Tran is a graphic designer who has spent her impressive, impactful career using her creative skills in the service of progressive activism, in a variety of forms. She first contributed to OpenAir in its earliest days, hand designing small concrete blocks that were used to build awareness among state legislators for LECCLA in New York State. To close out 2021 Ange designed the OAC’s instantly iconic Klaus Lackner: Legend of CDR t-shirt.

As a professional graphic designer your career seems to have had a heavy activist orientation. Can you give us a summary of your journey?

As a designer it’s been personally transformative and, I like to think, actually transformative to be part of real change and real impacts. I have had the great opportunity to support some incredibly important causes and dedicated activist organizers with a lot of the strategically crafted stuff I’ve made. And there have been some real wins, and those wins took tons and tons of people working together… and I got to help. It’s humbling, hard, tedious and fulfilling work.

We’re all shaped by our childhoods and I’m no exception. I grew up very poor (section 8 housing), in a very poor state (Maine), with a very troubled single mother and three siblings. As a first generation Vietnamese-American I didn’t see people that looked or lived like me or my neighbors represented in cartoons, sitcoms, or the news hour …unless it was depictions that no one would be proud of or want for themselves. Later, I went to art college in Brooklyn, and that experience – and just living in New York – gave me so much and kind of blew my mind. I’ve been influenced by everything I accessed.

One of my first creations as a graphic design student was for an advertisement assignment, I decided to make an ad that promoted wind energy: I made a drawing of five small spindly power lines running over a rolling hill side, part way the power line utility poles stopped and the lines themselves shot up into the sky where they connected to huge, colorful and festive kites. For better or worse, my student projects did not at all cater to the world of commercial advertising… which too be honest with you was a little ridiculous of me, because I was going into wild amounts of student debt and totally turning my nose up at the primary industry that’s interested in hiring people with bachelors degree in graphic design! I don’t regret it.

Looking back (and forward) what’s the practical function of visual design in making change in the world?

There is SO MUCH that can be said about that. The “stuff” we see, or make to be seen… is a lot more than just making something “look pretty.”  The practical function of visual design is both a subtle and powerful way to shape the ways in which an idea is understandable. And a visual platform helps dictate the narrative and perspectives that make that understanding meaningful to people. Visual design is communication, and the most powerful visual design is underpinned by strategic thinking and artful execution.

Thoughtful, symbolic imagery helps lower the forgetting rate and makes the experience of taking new information in feel more meaningful. Getting the right photo (and supplying it to papers) can be the difference between getting your story covered (or not) by press outlets. Creating a well organized, beautiful material can help your cause make and hold space in a legislative environment lousy with aggressive lobbyists (who have far more resources and hostile tactics to boot.)

How did you get involved in OpenAir?

If you’re here, reading this and browsing this website, I assume that you and I are on the same page about the climate emergency AND our role in that as a species, and as a nation. The effects of climate change have already triggered hunger crises, massive droughts, etc. And all of these effects will harm the disenfranchised first, the hardest and most cruelly in our country and across the world, driving already rampant inequality further.

I first got involved with Open Air Collective a couple years ago thanks to my friend, Chris Neidl. He and I have collaborated as renewable energy enthusiasts and dedicated climate crisis activists on and off since 2009.

Curbing emissions won’t be enough to save us. We have to find ways to remove and sequester massive, massive, massive tons of CO2—fast. We’ve inherited an innumerable number of tremendously threatening problems, we’ve all got to do our best to work together and solve them. So understanding that, OpenAir was naturally appealing.

Your Klaus Lackner: Legend of CDR t-shirt is, well, legendary. Tell us about what inspired the design direction you took. What were your goals?

It’s a mix of inspiration, expertise rooted choices (like how far away a letter at a particular size can be read,) the technical requirements that have to be met (like limited colors, perfectly separated into layers and legible on diverse cloths) and specific visual requirements (like retaining a recognizable photo resemblance of Klaus.)

Without going too far down the rabbit hole of the nitty-gritty, suffice to say making this took a lot of time! First and foremost, I wanted to do my best to make the artwork specifically keyed to look good on a shirt. That probably seems like a “no duh” answer but there’s a lot to it. It’s going to be on cloth that moves and curves around a body—and too much flat color changes the texture and wearability of the shirt and additionally results in artwork that will be damaged much more quickly and readily from normal wearing and washing it.

Visually, I did a lot of typographic (all the type is custom) and aesthetic versions. Using Open Air’s signature colors to translate a face was a definite challenge. With color separations like this every stinking line has to be a very intentional choice. When you do it well, it’s basically invisible but when a mark is off, its glaring—ugh!

Overall, I’m very happy with how the shirt came out. I think I did a good job!

Any cool activist plans for 2022, OpenAir related or otherwise?

The ongoing pandemic has really changed what activist actions can be in that pretty much all group gatherings become too great of a health risk. Man, it’s frustrating. And, there’s other effects too, like legislators and their staff aren’t on governmental campuses in a same old way as before. The last time I did stuff to appeal to legislators about CDR, I custom painted a bunch of special concrete cube samples (sequestered CO2, less water use, etc.) wrote up some materials with appropriate info on legislative bills and their bill numbers, took a bus to Albany, and visited my legislator’s office with them. 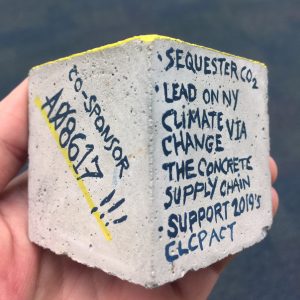 In 2022 we’re all going to need to come up with some extra creative activist problem solving, and we’re going to need to express our demands extra visually, extra beautifully and with extra emphasis to get representatives’ and the worlds attention!